I remember summers being mostly about fun when I was a kid. No homework, no school plays, no sports team workouts, no debate team prepâ€”just lots of swimming, Girl Scout camping trips, family vacations, and loads of unstructured time. There was plenty of time for sewing despite Mom adding a few more household chores to my daily routine.

Last week I got to be a kid again, too, in addition to being a teacher. I spent most of the week with four amazing young girls in another session of Kids Sew Camp. One 9-year-old had never sewn while another had been in an after-school sewing program and was totally fearless. The 11-year-old had her own sewing machine and her own ideas of what to do with fabric. The 12-year-old had sewn a little and was very attentive and focused. Every day we did work on our “chores” of sewing exercises and planned projects, and every day we also had some unstructured fun time just for creating. As usual, I started by having the girls sew on paper, since there are no worries about “wasting” or “messing up” paper. They sewed paper seams and measured them to evaluate their accuracy. They learned what happens when you don’t put the presser foot down! I asked them to sew around a sewing pattern that is chock full of corners and curves to be negotiated. There is ALWAYS plenty of complaining about this exercise on the first day, but there is method to my madness. When they sew the pattern again on the last day of camp they see exactly how much they have progressed in just a few short days of sewing. Sneaky, huh? 😉 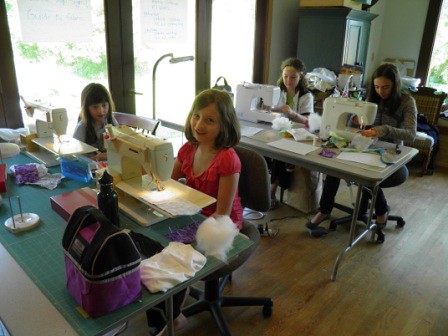 All of the students in this session were just bursting with creative energy, and completing a single teacher assignment was not enough for them. Scraps of fabric, ribbons, fiberfill, and trims became scissor bags, purses, doll aprons, and more. Those girls were sewing every minute, either on my planned project or something of their own devising. So much imagination and energy! I loved watching their skills increase, as well as their self-confidence. Take a look! 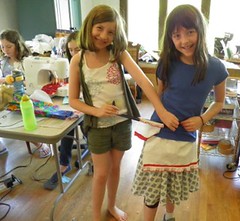 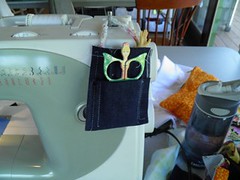 Small zippered bags were the planned project for day one. With a little help from WonderTape, they all made a cute lined bag with a zipper. (Sorry to have missed A. in the pix – she made one too!) 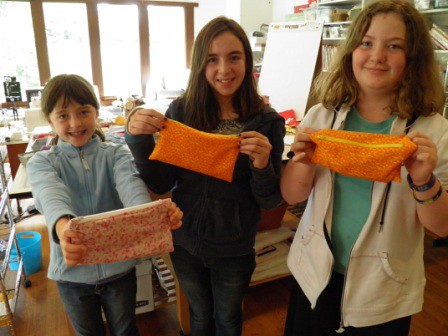 Pajama pants, a sleeping bag and a poodle skirt for American Girl dolls were also made during Kids Sew Camp. They quilted batting to denim fabric, couched cording onto their poodle skirts, double-stitched seams, made a casing for elastic in their pajama pants, and plenty more.Â  I hope all these girls keep sewing, because they already have some mad skills. Practicing will increase their confidence and mastery for sure. I wonder where their sewing journey will take them throughout the years? 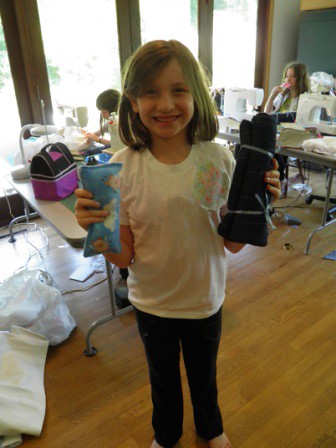 If you would like to see the entire album for this Sew Camp, be sure to visit the Sew Maris Facebook page, and check out the Sew Maris Kids Sew Camp July 2012 album. I guarantee you will see more cute stuff!