…and her name is Jenny! This perfectly awesome woman who used to spend her evenings relaxing and bonding with her husband and two daughters has turned into a sewing monster. Her husband hasn’t seen her in days. Her children haven’t had a home-cooked meal in weeks. Her horses, well, that is another obsession. 🙂

Jenny started sewing lessons with me about 6-7 months ago, ostensibly to learn to make home dec items. You know, like pillows. I *might* have mentioned somewhere along the line that home dec was not my favorite kind of sewing, but she ignored me and forged ahead. After a few pillows, she started talking about how fun it would be to make cute clothes for her two daughters (who BTW, are two total lamb chops). Twirly skirts were first, and now she is on to jumpers and more.Â  Then I started on my jeans-making obsession. So Jenny got on that bandwagon too. She borrowed one of my, er, several sewing machines so she could practice sewing at home. Then Sew Expo came along, and she decided to at least go talk to all the sewing machine vendors. Yep, now she owns a new Viking machine with plenty of bells and whistles. Oh, and there’s her eBay serger purchase, too. Did I mention that?

Today Jenny was finishing up her first pair of jeans. Nice work! 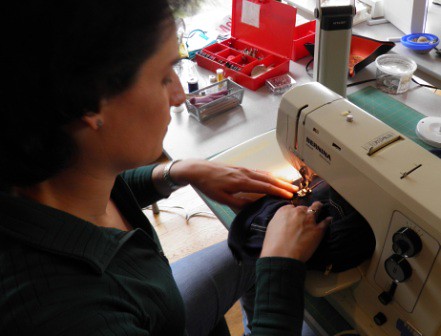 Here is a darling pillowcase she made for one daughter, and yes she did make a second one for daughter number two. 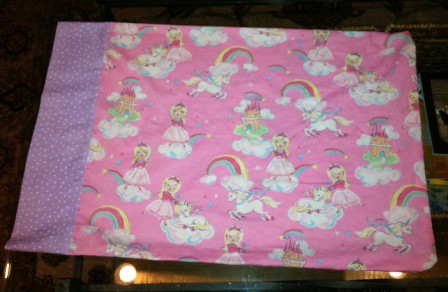 Once you get started, you just don’t have any idea where the sewing bug will take you. I hope Jenny’s husband is happy Jenny and I met. I know I am! Keep on sewing, Jenny!